Being huge fans of Frederick Law Olmsted, considered by many as the father of Landscape Architecture, we’re always moved when we stumble on a familiar Olmsted element like Central Park’s Bow Bridge, and get see it in a new light.  Central Park has over 31 bridges and that’s not counting the many assorted rustic wooden bridges or the vehicular bridges that carry traffic overhead. (cont. below) 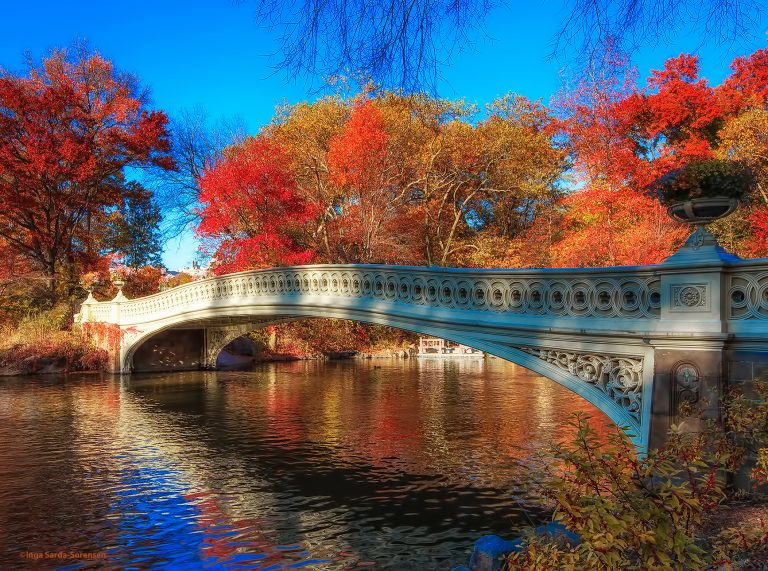 Now, the crown jewel of Central Park, Bow Bridge’s slightly swooping ‘archer’s bow’ has held the hearts of  New Yorkers, tourists, couples, brides and grooms, movie-watchers, joggers, row-boaters, photographers, and fishermen since it was built in 1862.

The epitome of New York romanticism, this Victorian cast-iron bridge was built with ‘classical Greek refinement,’ incorporating elements of Gothic, Neo-Classical, and Renaissance design, and has eight three and a half foot tall planting urns.  The bridge spans 87 feet, with a walkway of ipe, a South American hardwood that turns a deep red when wet.  The bridge is the second oldest cast-iron bridge in America.

The passageway was created as part of the plan of Frederick Law Olmsted and Calvert Vaux (the creators of Central Park) to develop an interwoven transportation system of pedestrian paths, bridle trails, and carriageways, with a system of compact bridges and archways that would allow for a large number of competing paths within a small area.

Bow Bridge swoops gently over The Lake, connecting the lakefront setting of Bethesda Terrace and the hilly, grassy area of Cherry Hill, named for the Cherry Blossom trees that bloom in winter and popular with picnickers, readers, and sunbathers, with The Ramble, a tree-covered, hilly woodland walk, meant to allow New Yorkers to get lost in nature and often frequented by bird watchers and natives looking to momentarily escape the city.