Will climbing vines damage my home?

We get asked a lot of questions about climbing vines and whether or not folks should include them in their gardens, walls and/or fences. We will answer the questions, Will climbing vines damage my home?

We think is important to know the climbing plants may not be the right option for every situation but it’s worth noting that the right climbing plant in the right location can look outstanding. There’s something about an ivy or vine covered surface that gives a structure a sense of grandeur. For the most part, vines do less damage to bricks and mortar than the abounding rumors would have you believe.  However, climbing vines can cause some problems in certain circumstances.  To help you understand the issues involved, a little description of vine morphology is prescribed.

Scrambling vines may be thought of as upright plants with very weak stems.  They climb simply by growing up and over the tops of nearby vegetation and structures.  Scrambling vines (“climbing” roses are a well-known examples) are usually poor candidates for wall vines unless trellises are used. Some vines climb by wrapping their stems around supporting vegetation or structures.  Honeysuckles are classic examples of vines that typically employ this method of getting from down here to up there.  Vines that climb by the use of tendrils include most grapes.  They climb by attaching themselves to supporting structures with the use of twining tendrils.  Again, trellises, wires or similar support structures are required for this type of vine to cover walls. Finally, some vines, for example Virginia creeper, have specially modified tendrils with flattened tips called holdfasts which quite literally glue themselves to supporting structures like tree trunks and cathedral walls.  This is the method employed by Boston ivy (a relative of Virginia creeper) and English ivy in attaching themselves to Ivy League dormitories and certain Chicago baseball park outfield walls.

Now, the problems.  If you’ve had a vine attached by holdfast attached to your wall for some time and you then decide that you really don’t want it there anymore, removing it can be a chore and often a very messy process.  Typically, such a “cleaned” wall will be covered with tenacious holdfasts and bits of tendrils and vines for some time.  Some chipping of bricks can also occur in the cleaning process. 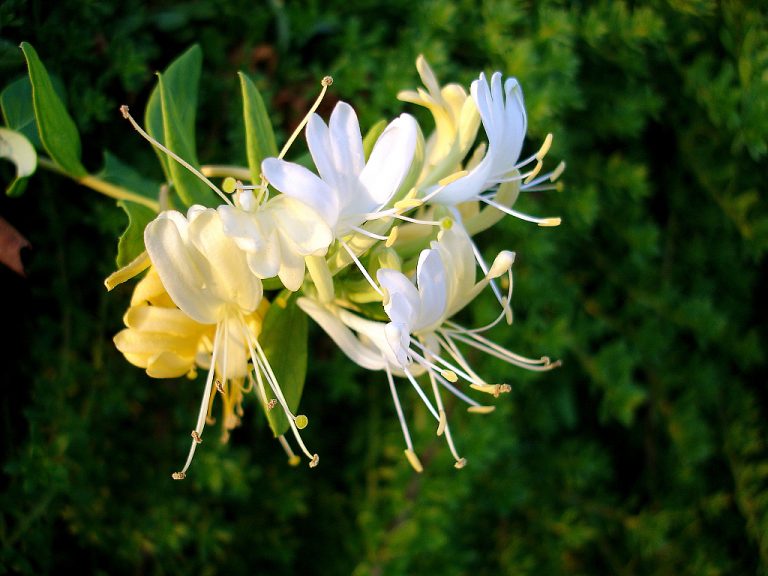 Some vines don’t necessarily want to stop growing when they reach the eaves of a building and can sometime damage eaves, gutters, shingles and/or slow-moving children.  The weight of vines can cause structural failure in some cases, though that is not typically an issue with masonry walls.

Clinging vines should not be used on walls with wood or composite siding since they will hold moisture on the wall and hasten rotting of the siding.

Vine-covered walls do provide habitat for insects, birds, reptiles and other creatures.

On the plus side, a vine on a south or west-facing wall can make a big difference on air conditioning costs.  A deciduous vine on one of those walls will cut cooling costs in the summer while allowing for sun penetration and reduction of heating costs in the winter. 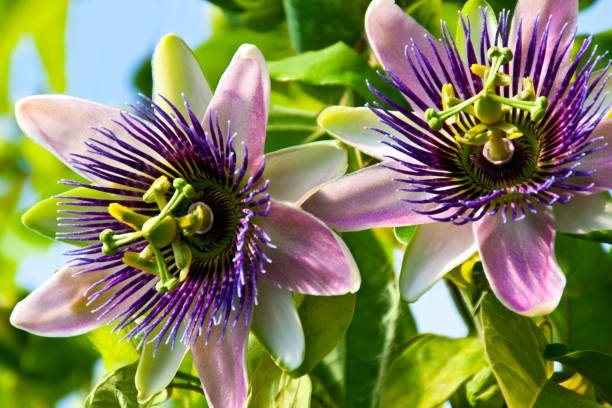 Peas are a good example of a plant that uses tendrils to climb. Tendrils are skinny, wiry structures along the plant’s stem that actually reach around in the air until they come into contact with something they can grab. Once contact is made, the tendril curls, forming a coil that allows the plant to adjust the degree of tension or pull on the support.

There are two kinds of tendrils. Stem tendrils (which passionflowers and grapes have) are shoots that grow out of the stem. Leaf tendrils (which peas have) look very similar, but the tendrils are actually modified leaves that emerge from a leaf node.

Like a rock climber scaling the face of a mountain, plants that have tendrils need handholds in the form of horizontal supports

Trellises are a popular support for tendril-climbers.   Horizontal wires or strings attached to secure posts are ideal. Just don’t position the  more than about 4 inches apart or the newest set of tendrils may not be able to reach the next level of string. Also, because most tendrils are only about an inch long, they need to wrap around something thin (like string or wire) that’s no more than about 1/4 inch in diameter.

Examples of Plants that Climb with Tendrils

Morning glories, pole beans, honeysuckle and clematis are some of the many plants that twine. There are two important differences among twining plants: they either have twining leaves or twining stems.

Plants with twining leaves, such as clematis, use their leaves like tendrils. The young leaves of these plants are able to twist around slender wires, string, twigs or other leaves. The key is to provide a thin enough support for the leaf stem to curl around. A lattice made of 1-inch wide slats won’t work for leaf twiners.

Twining stems twist around whatever they touch, be it a pole, branch, wire or chair leg. The stems will wind clockwise or counterclockwise, depending on the species of plant.

There are loosely twining stems such as gourds, and strongly twining stems such as thunbergia, wisteria, morning glory, jasmine and Dutchman’s pipe. Some of these twining vines can grow very large and become extremely heavy. Wisteria is famous for pulling down porches and garden structures. If you are planting a perennial vine that will eventually become very large, be sure to provide strong support. 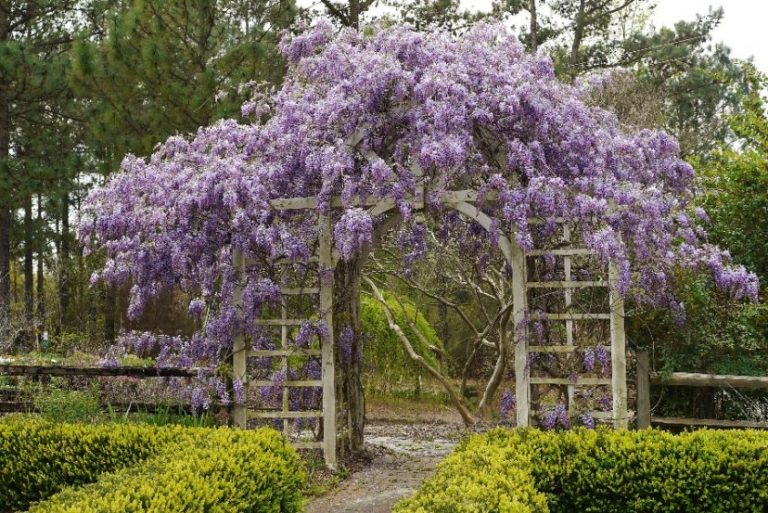 Although Wisteria is known for it’s destructive habits, if you can find a place where it can be kept under control by frequent, aggressive pruning, we feel there are  few climbing vines that can add a sense of time to a garden as quickly as Wisteria.  Some of the best examples are at the Biltmore estate in North Carolina. Native American Wisteria pictured above is much less aggressive than Japanese or Chinese varieties. 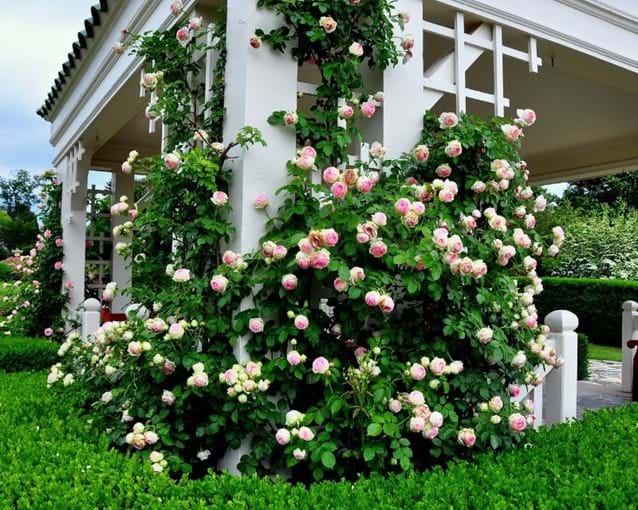 Examples of Plants that Scramble or Ramble 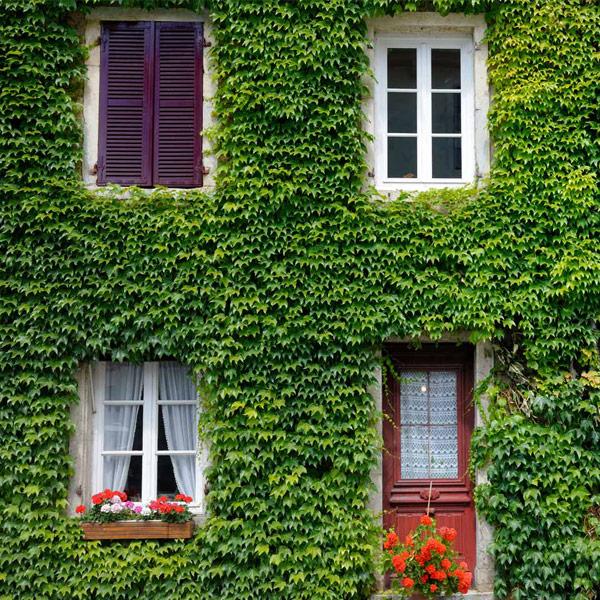 Boston Ivy attaching itself to a stone façade

Boston ivy (Parthenosissus tricuspidata) and Virginia creeper (P. quinquefolia) have stem tendrils with touch-sensitive adhesive pads that allow them to stick to almost any surface. Climbers with adhesive pads can attach themselves to the face of a building or the trunk of a tree. If not provided with a vertical support, they will just as happily crawl sideways, attaching themselves to anything in their path.

Examples of Plants that Climb with Adhesive Pads The last group of climbers use clinging stem roots to attach themselves. The stems of these plants produce a cluster of short, stout roots that cling to surfaces of almost any kind. Examples of plants with clinging stem roots include climbing hydrangea (Hydrangea petiolaris), most ivies such as English ivy (Hedera helix) and Irish ivy (Hedera hibernica), and also euonymus. These plants can damage paint work and mortar if you try to remove the stem roots from a structure.

Examples of Plants that Climb with Clinging Stem Roots